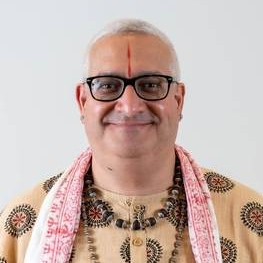 Pandit Krishna Kripa Dasa was born in Spain to a father who was an Indian Hindu and a mother who was a Spanish Catholic. He grew up in an interfaith interracial family, joined the Hindu Vaishnava school, and was ordained a priest (purohit) in 1994. He has been involved in interfaith dialogue since 1997 and is a member of several interfaith groups in Spain such as UNESCO, Transcendence and other interreligious groups from Madrid, Sevilla and Alicante. He has written 16 books about Hinduism as well co-authored another four – two for UNESCO about funeral rituals of word religions.

Nature and Spirituality, the worldview of religions in the face of global change.

It is a book about the relationship of nature and enviroment care according to different religious views. Eleven persons from 8 different relligions participated. Then we did a phisical book presentation in a two days Encuentro or Meetings with 8 of the 11 authors in the city of Ceuta.