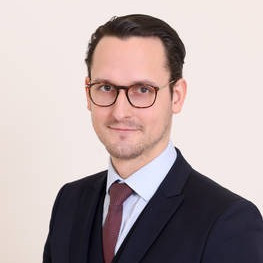 Advisor for ethics and business at Advanced Islamic Studies Institute

Pierre studied economics, finance and strategy in France, Belgium and the UK, and is currently employed as a mergers and acquisitions analyst in London. Previously he worked in Paris as an analystin Equity Capital Markets.

Since he was 18 years old, Pierre has been an advisor for ethics and business to the Advanced Institute for Islamic Studies in France and the Italian Islamic Religious Community in Italy.

These two organizations are working to promote the knowledge of Islam, for example through participation in public debates, (with representative bodies, media, the education and research communities and civil society); and to encourage interreligious and intercultural dialogue at a local, national and international level.

Since 2015 he has been a participant in the Youth CAN Network (counter narrative dialogue with Facebook, Twitter and Google). He received The Ariane de Rothschild Fellowship in 2016. He has been as speaker at Harvard University, and Tufts University in the United States at conferences on interreligious and intercultural dialogue, as well as being a speaker at the Assemblee National in France. He has also spoken on these topics at cultural centers and mosques around the world

Environment and Sustainable Development in the Euro-Mediterranean Area: an interreligious and intercultural approach

In 2016, the IHEI started a reflection on the contribution of traditional wisdom, spirituality, and cultures to climate change issues. After several meetings with important international decision makers (religious leaders, politicians, teachers, etc.) we organized, at the French Parliament in Paris, an international conference on “Environment and sustainable development in the Euro-Mediterranean area: an interreligious and intercultural approach” to refocus these questions on a wider basis including culturally and spiritually oriented vision.

As a follow-up, it was proposed to disseminate the benefits to the students and teachers of Higher Education institutions by editing a guidebook, which will present good practices and new proposals.

Audencia Business School, one of the partners of the Paris conference, is interested in hosting a pilot workshop. We developed a reverse education workshop with students and a panel of religious leaders, politicians, and teachers discussing:

This meeting was rhe first of a series of similar encounters in several universities in France, Italy, United Kingdom, Morocco, etc.