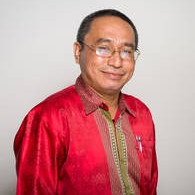 Ridwan (known as Ridwan al-Makassary) is a young religious leader of Islam in Papua Province, Indonesia, as well as a lecturer in International Relations of the Universitas Sains dan Teknologi Jayapura Papua teaching Negotiation and Conflict Resolution and Introduction to Peace Studies. He works to mainstream moderate Islam and non-violent movements. He earned his first master’s degree in sociology, from the University of Gadjah Mada, Yogyakarta and his second master’s in human rights and democratisation from Sydney University and Mahidol University.

Currently he is staff at the Forum for Interreligious Harmony Papua and research director of the Papua Peace and Development Action Institute, a local NGO for peace in Jayapura, Papua. He has authored several books on peacebuilding and politics in Islam such as “Damai Papua Damai Indonesia” (Peace in Papua, Peace in Indonesia) and “Neo-Fundamentalism in Office Mosques in Indonesia”. He attended Peacebuilding and Conflict Reconciliation trainings at American University, USA in 2009 and Muslim Exchange Programmes in Australia in 2014.

Moreover, since 2012 he has worked for Papua Land of Peace in Papua as a facilitator and trainer in interreligious dialogue. Since the first decade of the century, he has been working for peace in Indonesia as Peacebuilding and Human Rights Coordinator at the Center for the Study of Religion and Culture in Jakarta. One of his efforts in peacebuilding in Papua is as a member of the mediator team of “Tolikara Incident 2015” between Muslims and Christians.

This initiative is a new kind of attempt to provide module of IRD toward grass-root religious leaders in Eastern part of Indonesia. It is based on my experience in conducting interfaith religious leaders in Indonesia, especially in Papua. To date the kind of trainings are very limited and there is no guidance to carry out the trainings. This module provides a holistic knowledge how to conduct training on IRD in post and potential communal conflict. In particular, this module provided reading sources and ice breaking/energizer so it can be easy to do in the field. The module will be distributed to grassroot religious leaders in Papua and other places that face similar situation