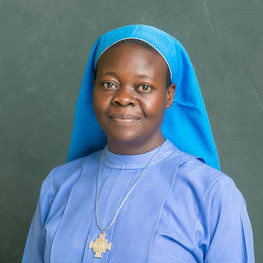 Rev. Sr. Rose Kyaligonza is a Ugandan sister from the congregation of the Daughters of Mary (Bannabikira Sisters) of Uganda and an assistant lecturer in the Department of Religious Studies at St. Augustine University of Tanzania. She has taught Christian Religious Education in Secondary Schools in Uganda and Kenya and also served as a secondary school head teacher in Uganda and Kenya. Sr. Rose holds a BA in education and an MA in religious studies and is currently a PhD candidate in religious studies at the Catholic University of Eastern Africa.

During her work in teaching and administration, the seed of interreligious and inter-cultural dialogue blossomed, but her path began in her bachelor’s studies in a course on religions in the contemporary world. She also studied interreligious dialogue during her PhD. Her passion for IRD further grew when she was assigned to teach a course on comparative religion at St. Augustine University, which she has taught from 2009 to the present. This has enabled her to work with students from various faiths and cultural backgrounds. Her interests include teaching – especially comparative religion and ethics, working with youth, research, interacting with people from different faiths and meditation. In her pursuit of interreligious dialogue she is guided by the motto, “Unity in Diversity”.

The initiative will bring together religious sisters from various congregations who work in houses of formation in Mwanza Archdiocese, Tanzania. The aim is to train sisters in interreligious dialogue principles and to discuss how peace can be promoted among people of various religious communities in their respective areas of the apostolate. Participants will be asked to write some short essays on how they can be instruments of peacebuilding in our religiously pluralistic society.

They will be invited for a three days workshop on interreligious dialogue in which they will share their views, share their experience and do some classes focusing on dialogue and to create a way forward for promoting peace in their respective communities.

Sisters working in houses of religious formation have been selected because they are “trainers of trainers” since they form/teach young girls who will later become religious sisters who will be involved in various apostolate such as nursing, teaching, social/pastoral work, administration, etc. They will, therefore, interact with people of various religious communities. They hence need a theoretical disposition of IRD principles and nuances to enable them to serve their pluralistic communities well.

The initiative will focus on training university students on the concept of inter-religious dialogue to counter any misconceptions on what it is and how they can replicate it in their society and school settings. The initiative will be in a two-day phase where the first day will mainly be training while the second day the participant will participate in discussion with religious leaders on IRD. It will have a particular attention to religious group leaders in the universities and some sessions will be handled by notable religious leaders. The participating students will be drawn from all the religious groups present in the partnering institutions and communities.