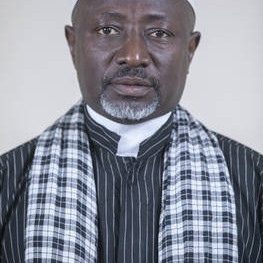 He attended the local Islamic and nursery home lessons between the age of 4-7, then enrolled to Ratibi Moslem Primary school (founded by Animashaun family) at the age of 7-12. He was attending a pure Arabic and Islamic school known as Mahdil arabiyyah (Arabic Institute of Nigeria), at Medina street, Elekuro Area in Ibadan, on weekend basis, at the same time. [VO1] He attended Liberty Secondary Commercial Academy (1979-84), Ahmadu Bello University (ABU) (Sandwich Program), United Christian  University (USA) Macotis Campus (Obinze,Nigeria).

He was the Iimam and chief Imam of Muslim Students SocietysvSociety (MSS) of Liberty Academy and Oyo Area Unit “A” Council “E” respectively. He was serving voluntarily asd an assistant (volunteer) in Council of Muslim Youth Organisations (COMYO) from where he was found capable to serve as coordinator of an Islamic Propagation Centre (IPC) established by same COMYO later known as NACOMYO, in 1986. In 1989, his appointment was taken over by World Assembly of Muslim youth (WAMY) African Secretariat, tilluntil 1996 when he became Deputy Chief Imam of Imo Central Mosque, Shell Camp, Government House Street,Owerri..

The program started at about 10:46am due to the late arrival of the participants. The opening prayer was coordinated by the deputy NYSC coordinator, Mr Mike Imoidib, where everybody was asked to pray silently for 30 seconds. Then goodwill messages were given the national director Muslim Christian Youth Council (Hon Ifuma Emmanuel), the chief imam of Imo state (Barr Suleiman Yusuf Njoku), the general Secretary of the Muslim Council in Imo state (Alhaji Yaya Bui) and the representative of the chairman of Christian Association of Nigeria (Rev Chigozie Nwaka). The co-facilator, Elder Mrs Uzoaku Williams asked few of the participants about their expectations from the seminar. Then the ground rules were set. Briefs about KAICIID was said Elder Uzoaku Williams and supported by shaykh Salih Animashaun. Tea break was observed at about 12:20pm just outside the meeting hall. The seminar was then officially open with speeches from some of the dignitaries. Then group photograph was taken. Interreligious dialogue was discussed from the Christian perspectives. Also interreligious dialogue was discussed from the Muslim perspectives followed by questions and answers. Perceptions and misperceptions were discussed and cleared. Group work was done involving 3 groups. The challenges encountered and things that went well were discussed. An interfaith prayer was said individually at about 4:10pm and the invitees were served lunch and given reimbursement fee.