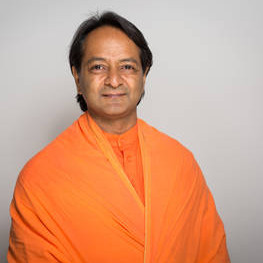 Before being ordained as a monk, Sri Swami Svatmananda earned dual Bachelor of Science degrees in electronic engineering and computer science and shortly after, a master’s degree in global business administration and international management. Early in his career, he was a renowned expert in the field of data communication and later, he utilised his skills and entrepreneurial instinct to help start and manage over thirty business and philanthropic ventures. Svatmananda had a successful career in technology, venture capital and international business, as well as in the non-profit sector.

However, something was missing. He felt a life-long attraction to the wisdom of ancient civilisations such as the Greeks, Mayan, Incas, Hopi, and finally, settled with the ancient wisdom of India known as the Veda. Svatmananda traveled great distances to learn from the foremost experts of Vedic knowledge, including the eminent scholar Swami Dayananda Saraswati.

Today, Svatmananda lectures on Vedic knowledge including Yoga, Vedic Astrology, Ayurveda (medicine), Vaastu (architecture), and Vedanta. He has conducted courses and workshops from North to South America, Africa, Japan, India, Europe and most recently in the UK and Vienna, Austria. Culturally, Svatmananda’s experience of growing up on four different continents and among multiple religious traditions has led him to connect amicably with people from all backgrounds. In his global travels he has been called upon to arbitrate between dissenting parties right from his college days. He has helped to mediate on political, tribal and business dissonances.

His credence is “We all are one, manifesting in multitude myriad of colourful expressions.”

Development of a basic tool to aid in any conflict mediation or resolution using the concepts of “subjectivity versus objectivity” to help fellows and IRD mediators shift their personal perspectives to explore broader contexts from a different perspective.