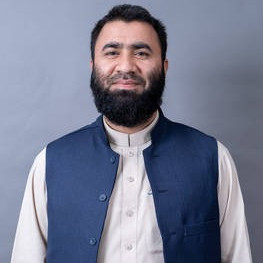 Tahmeed Jan serves as Executive Director of the International Research Council for Religious Affairs, a leading think-tank in Pakistan that aims to have no boundaries in research and development through religious engagement. He has completed different projects with and trained more than 4,500 religious scholars in different projects such as polio eradication, promotion of democracy, and intra- and interfaith harmony. He has also participated in Imam training at Al-Azhar University, Egypt.

Tahmeed has successfully completed a research project on the so-called Islamist State of Iraq and Syria (ISIS) and published booklets to counter ISIS narratives. His intellectual contribution includes research and publications on ISIS or Khawarij, Islam, Democracy and Pakistan, and the Middle Way. He sees dialogue as a shared tool of awareness in which opinions are formed, questions are examined and the implications of theoretical evidence are concluded. It is a tool of consultation, mutual advice, and cooperation in righteousness and piety, which is the road to maturity and perfection.

Tahmeed grew up in Pakistan in a diverse religious environment and affiliated with Islam and also deeply studied other religions in Pakistan. Tahmeed has a master’s degree in Islamic studies and Arabic language. He also graduated from Haqqania University, Pakistan, where he received a religious education. He is fluent in Arabic and Urdu, in addition to English.

Root Causes of Sectarianism in Pakistan

One day consultative workshop and two TV shows were conducted regarding root causes of sectarianism in Pakistan. Summary of the workshop and TV Program is briefly described here. Mr. Tahmeed welcomed the participants and briefly introduced KAICIID. He also shared the objectives of the workshop. Then an introduction session of participants was held. Mr. Tahmeed invited Dr. Nadeem Abbass, He also emphasized the role of Religion as a peaceful tool. Strengthening peace, harmony, tolerance and religious pluralism among all Segments of the society, and accepts diversity of the people living across the country for Promoting religious pluralism, prosperity and inclusive society. Ms. Razia Naveed highlighted causes and effects of diversity. She mentioned that it is due to the exploitation of religion that the problem of sectarianism emerged in Pakistan and has become now part of culture in Pakistan. Muhammad Jan (Asst. Director NACTA) discussed about the root causes to sectarianism in Pakistan. He said that In Pakistan, religion has been used as an effective card by the religious, political and military elite for grabbing more and more power. Tahmeed Jan, executive director: International Research Council for Religious Affairs explained the rules and procedures of Interfaith & Intersect Dialogues. Tahmeed Jan concluded the session by briefly summarizing the key points of the workshop/root causes of sectarianism in Pakistan. Two TV programs were conducted in which Dr. Qibla Ayaz (Chairman Council of Islamic ideology/State Minister) also participated along with various Religious leaders belonging to varied Sects. They identified the challenges of sectarianism in Pakistan and pointed out the way forward for promotion of Inter-Religious Dialogues (IRD) to overcome such issues.