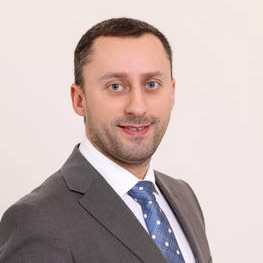 Dr. Taras Dzyubanskyy holds a B.A. in Philosophy and studied at various papal institutes in the Vatican. In 2010, he received a prestigious Russell Berrie Fellowship in Interreligious Studies, which enabled him to pursue his doctoral degree and to obtain his PhD in Theology and Interreligious Dialogue in 2012. Since October 2012, Taras has been working as an adviser for religious and ecumenical issues to the Mayor of Lviv. In May 2013, he inaugurated an interfaith centre, “Libertas,” the first of its kind in Ukraine. Since its creation, the centre has held over 40 ecumenical and interreligious events to promote dialogue and understanding among different religious groups. Taras has been awarded with several distinctions related to his innovative approach on interfaith dialogue and social issues. For the past three years, he served as an adviser to the President of the Lviv Chamber of Commerce and Industry on social issues. He now teaches at the Ukrainian Catholic University in Lviv, Ukraine and coordinates an international group of alumni of the John Paul II Center for Interreligious Dialogue. Author of three books, Taras is strongly committed to promoting interfaith and intercultural dialogue as he believes that people of different faiths have a lot to offer to humanity through their religious experiences and traditions which are an invaluable source of wisdom, prudence, love and respect. A motto that Taras identifies with is “Seek the truth, and the truth will set you free.”

The Interfaith Espresso Workshops are designed to empower young people aspiring to become religious (both ordained and non-ordained/lay) leaders to take an active, responsible role in their communities and to work jointly for the common good. The growing awareness of the important role of religion and its “soft power” to make change on the part of many secular institutions has also contributed to an interest in interfaith dialogue by secular institutions and organizations. Thus our initiative aims at creating conditions for combining “secular” and “religious” synergies to contribute to social cohesion, stability, peace and even economic development. The lack of such partnerships from religious and secular sides has often led to misunderstandings and even conflicts. Libertas believes that youth is in a unique position to contribute to peace and sustainable development. In this view, we have designed an initiative aiming at capacity-building for youth coming mainly from the Abrahamic faith traditions
The idea of this project was also born out of our communication with students, their feedback and while brainstorming ideas on HOW to do interfaith dialogue. While certainly the theological education and knowledge acquired during our studies are great, it would still be beneficial to have a practical course on IRD.