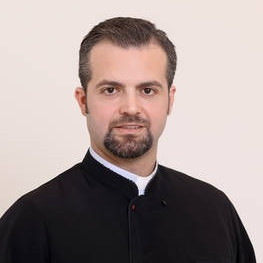 His Grace Bishop Maximos of Melitini was born in Karditsa, Greece in 1978. He studied English literature at the University of Michigan; history at Deree College, the American College of Greece; theology in Thessalonica and Athens, Greece. He received his master’s degree in and communications at the University of Strasburg where he specialized in Religious Diplomacy. His master’s thesis was titled “Eastern Orthodox and Roman Catholic Churches – Diplomacy and International Relations in seeking unity”. He also attended Seminaries in Religious Psychology and Political Analysis at Deree College.

He was ordained in 2003 in Karditsa, Greece, served as a dean in Karditsa; a parish priest at St. Mark’s Greek Orthodox Church in Belleview, Florida; Dean of the Greek Orthodox Cathedral of Holy Trinity in New Orleans, Louisiana; and Secretary at the department of External Affairs of the Holy Synod of the Church of Greece, in Athens. In 2016 he was appointed Vicar General of the Greek Orthodox Metropolis of France (Ecumenical Patriarchate).

He participated in many church delegations as an official representative and took part in many conferences related to religious extremism and the refugee crisis. In 2016 he officially participated as a special advisor at the Holy and Great Council of the Orthodox Church in Crete, Greece.

It will be an interreligious project between the Christian Greek Orthodox and the Jewish Community of Paris. Generally, most people emphasize on the Christian – Muslim relations in France, especially after the terror attacks of the recent years. Jewish – Christian Orthodox relations are not developed enough and I think this is a nice opportunity to work in this field. I already spoke with Rabbi Pauline of Paris and she was very happy to work with me on this initiative. My first thoughts are to organize a workshop at the facilities of the Greek Orthodox Cathedral of Saint Stephen. This is actually my church so I’m not gonna need money for hiring a special place for our meeting. The only expenses I may have will be for the food I will provide and the printing of pamphlets. I will organize mutual visits of the Jewish people to the Cathedral and especially at the Sunday Mass so they can meet personally the Orthodox parishioners, and equally, I’ll organize visits of the Orthodox people to the Synagogue so they can become closer to the Jewish community. I’ll print and I’ll share in both communities pamphlets with important information about the feasts and the culture of both Jewish and Orthodox people in Paris. I believe people from both communities eventually will feel more comfortable with the presence of the “other” and they will build personal relations and friendships between them which is very important in promoting peaceful coexistence.