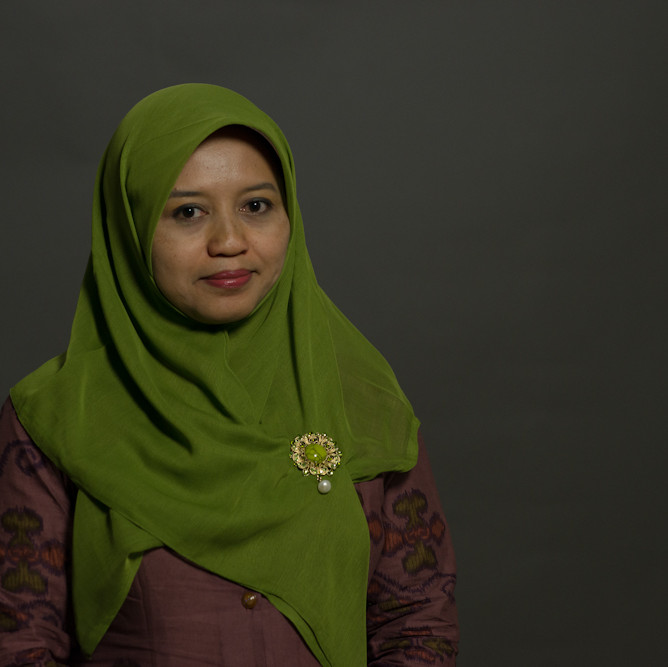 Wiwin Rohmawati is Vice President of Fatayat of the Nahdlatul Ulama and a Board Member of the Forum for Inter-religious Harmony in Yogyakarta. She has been working in the field of interreligious dialogue for over 15 years. At Interfidei, a pioneer of interfaith dialogue in Indonesia, she works as a researcher, trainer, editor, program officer, executive secretary and senior staff member. She also teaches several courses on Islam, interfaith dialogue and peacebuilding at Duta Wacana Christian University in the town of Yogyakarta. She was also assisted with several programs organized by The Dialogue Institute at Temple University, USA (2010-2011). Her main interest is the position and role of woman in conflict resolution and peacebuilding through interreligious dialogue. In 1999, as an undergraduate student and part of the Indonesian delegation, she attended the 7th World Assembly of the World Conference on Religion and Peace (WCRP) in Amman, Jordan. She finished her MA in Interreligious Relations at State Islamic University in Yogyakarta under the sponsorship of Kerk in Actie, a programme for missionary and diaconal work of the Protestant Church in the Netherlands. Along with her colleagues and network at Interfidei, she has successfully organized several national meetings on interfaith dialogue and peacebuilding issues in Makassar (2002), Bali (2003) and Papua (2014). While the Indonesian government requires all public schools from elementary to university levels to teach religion as a compulsory subject by using a mono-religious model (each student learns only his/her religion), since 2011 Wiwin and her friends have been promoting the implementation of an interreligious model of instruction, especially among middle school religion teachers in Yogyakarta. Her motto is “work hard, think smart and have a sincere heart”.

Amid the alarming inter-religious incidents and conflicts in the city of Yogyakarta—as well as in other parts of Indonesia—within the last two decades, this project is an initiative by civil society organization that will involve young women from different religious background. The participants will work together and share their experience in order to learn from one another on how to manage religious diversity in a pluralistic society. The focus is how women can make a difference by playing active and significant role in creating harmony, security and peace as well as preventing potential conflict in their society. This project will be implemented through several activities, namely a two-day workshop followed up with group meetings and visits to religious sites around Yogyakarta. The participants will be 25 young local women from five different religions assisted by two experienced inter-religious facilitators.

Teaching on Introduction to the Interreligious Tolerance for children

This pilot project is very important to be held because interreligious tolerance and respect the differences need to be introduced and taught to the children from an early age. There will be two activities, namely preparing teaching materials and methods and teaching practices in 4 muslim children education centre. There will be 4 class meeting at each centre during 2 months period and will be evaluated for continuation of this project.

Developing an Interreligious Dialogue and Cooperation among Women in Yogyakarta

The project is mainly arranged as a series of activities held by SRILI (Srikandi Lintas Iman) Community in Yogyakarta which was initially established in 2015 as a result of the previous initiative. The project designed to be implemented in a yearlong period (May 2017– April 2018) comprises of chain of activities derived from the core vision and mission of Srikandi Lintas Iman (please see the profile of SRILI). Some about to be implemented programs include a regular meetings, recreational activities, workshops and trainings, community socializations, building network and cooperation, formulating some problems at stake in particular for women and children of diverse faith, and collaborating in a close ties to respond to those problems. The project will be implemented in cooperation with 9 religious women’s communities and 3 different universities (Sunan Kalijaga State Islamic University, Duta Wacana Christian University and Atmajaya Catholic University), 2 NGOs (Mitra Wacana Women’s Resource Centre and ICT Watch – who working for internet safety and internet right), 2 forums (Young Women Indonesian Activist Forum – FAMM and Jogja Peace Forum), Archdiocese of Semarang (which include Yogyakarta area) and Yogyakarta Women’s Network.