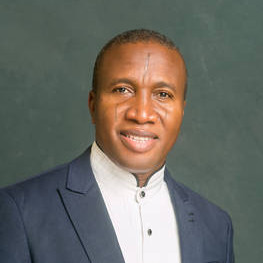 Rev. Zaka Ahuche is a lecturer at the Theological College of Northern Nigeria, in Jos, Nigeria. Rev. Zaka was president of the student union at his university, and later joined the Nigerian army from 1992 to 2005, then retired to serve humanity on full time basis.

Rev. Zaka was the Zuru Local Government Chairman of the Christian Association of Nigeria (CAN) from 2007 to 2010. On transfer to Birnin Kebbi the State Capital, in January 2010, he was elected as the State CAN Chairman in March of the same year where he worked from 2010 to 2017.

Zaka is a writer, a motivational speaker and a preacher; he has written three books, and has hosted and been a speaker at different seminars and lectures to promote IRD activities where he addressed and mediated between the traditional and religious institutions.

Rev. Zaka, received an award from the Kalangu and Shantu Gospel Ministers in Nigeria in 2016.

His motto is “Impacting knowledge will promote IRD and enhance peaceful coexistence.”

Kebbi State is located in North-Western Nigeria with a peculiar history that makes it unique in Northern Nigeria. It is a panacea for a study of peaceful coexistence, because, in two of the four Emirates viz. Different members of the same family practice Yauri and Zuru, Christianity, Islam and traditional religions without prejudice.

Though Kebbi shares boundaries with violent prone States: Zamfara, Sokoto, and Niger, there has not been serious cases of violence except for few religious challenges from some flashpoints. In fact, refugees from those States see Kebbi as a haven. However, recent developments in the political scene/arena and antecedents of the political environment are threatening the peace the State is known for.

Elections are close and campaigns are already on; there is the urgent need to kick-start an initiative that will curb or control any occurrence of violence (“sweating more during peace to bleed less during the war”). Religion remains the major instrument, used by politicians to ferment trouble, but by religious leaders to foster peace and unity. Hence the need for all stakeholders (of all levels) and the vulnerable (women, children/youth) to come together to achieve this feat and maintaining peace in the State.